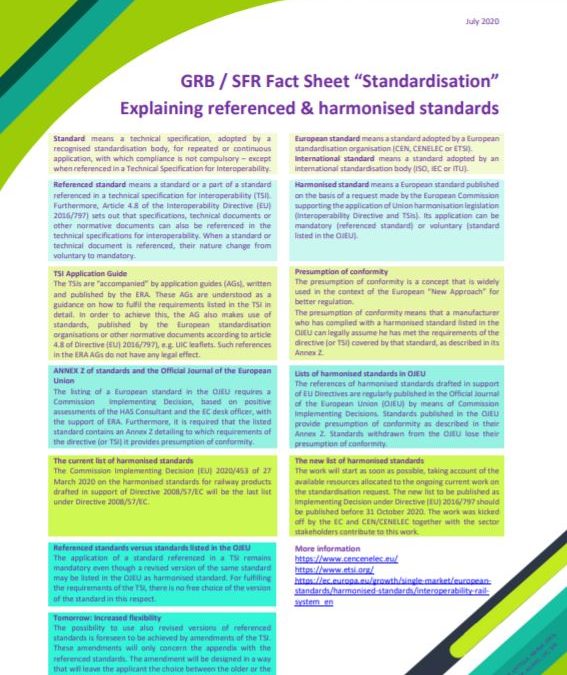 Standard means a technical specification, adopted by a recognised standardisation body, for repeated or continuous application, with which compliance is not compulsory – except when referenced in a Technical Specification for Interoperability.

Harmonised standard means a European standard published on the basis of a request made by the European Commission supporting the application of Union harmonisation legislation
(Interoperability Directive and TSIs). Its application can be mandatory (referenced standard) or voluntary (standard listed in the OJEU).

TSI Application Guide
The TSIs are “accompanied” by application guides (AGs), written and published by the ERA. These AGs are understood as a guidance on how to fulfil the requirements listed in the TSI in detail. In order to achieve this, the AG also makes use of standards, published by the European standardisation organisations or other normative documents according to article 4.8 of Directive (EU) 2016/797), e.g. UIC leaflets. Such references in the ERA AGs do not have any legal effect.

ANNEX Z of standards and the Official Journal of the European
Union
The listing of a European standard in the OJEU requires a Commission Implementing Decision, based on positive assessments of the HAS Consultant and the EC desk officer, with the support of ERA. Furthermore, it is required that the listed standard contains an Annex Z detailing to which requirements of the directive (or TSI) it provides presumption of conformity.

Lists of harmonised standards in OJEU
The references of harmonised standards drafted in support of EU Directives are regularly published in the Official Journal of the European Union (OJEU) by means of Commission
Implementing Decisions. Standards published in the OJEU provide presumption of conformity as described in their Annex Z. Standards withdrawn from the OJEU lose their presumption of conformity.

The new list of harmonised standards
The work will start as soon as possible, taking account of the available resources allocated to the ongoing current work on the standardisation request. The new list to be published as
Implementing Decision under Directive (EU) 2016/797 should be published before 31 October 2020. The work was kicked off by the EC and CEN/CENELEC together with the sector stakeholders contribute to this work.

Tomorrow: Increased flexibility
The possibility to use also revised versions of referenced standards is foreseen to be achieved by amendments of the TSI. These amendments will only concern the appendix with the referenced standards. The amendment will be designed in a way that will leave the applicant the choice between the older or the newer version of the standard, provided the newer version is still considered to fulfil the needs of the Directive and related TSI. 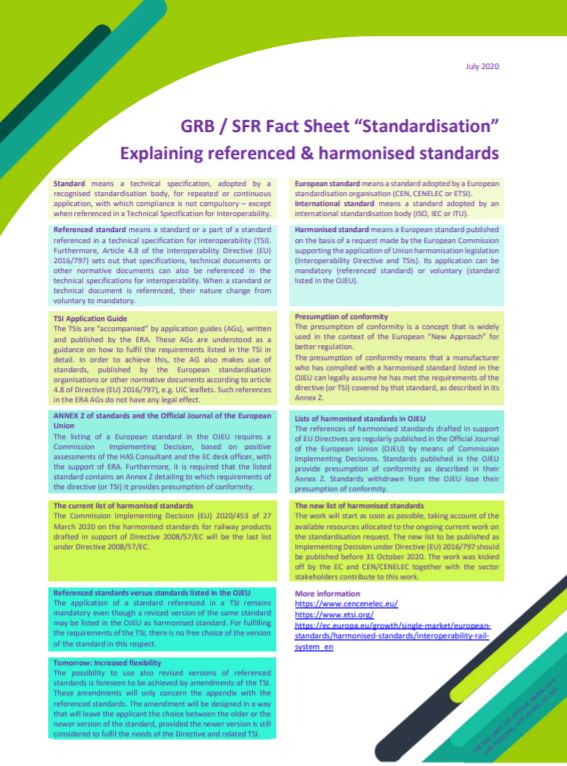