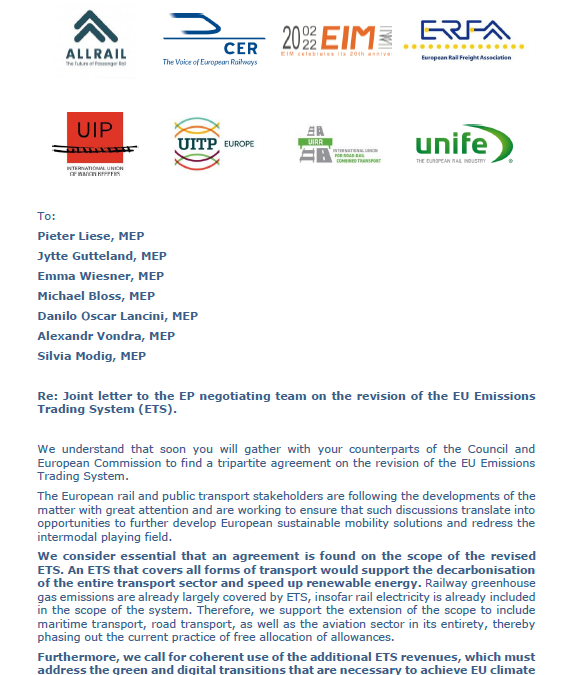 We understand that soon you will gather with your counterparts of the Council and European Commission to find a tripartite agreement on the revision of the EU Emissions Trading System.

The European rail and public transport stakeholders are following the developments of the matter with great attention and are working to ensure that such discussions translate into opportunities to further develop European sustainable mobility solutions and redress the intermodal playing field.

We consider essential that an agreement is found on the scope of the revised ETS. An ETS that covers all forms of transport would support the decarbonisation of the entire transport sector and speed up renewable energy. Railway greenhouse gas emissions are already largely covered by ETS, insofar rail electricity is already included in the scope of the system. Therefore, we support the extension of the scope to include maritime transport, road transport, as well as the aviation sector in its entirety, thereby phasing out the current practice of free allocation of allowances.

Furthermore, we call for coherent use of the additional ETS revenues, which must address the green and digital transitions that are necessary to achieve EU climate objectives and a sustainable recovery from the pandemic. We find that the provision promoted by the European Parliament of dedicating at least 10 % of the revenues generated from the auctioning of ETS allowances “for the development of public transport, in particular climate-friendly passenger and freight rail transport and bus services and technologies” must constitute a non-negotiable red line of the EP negotiating team.

These resources from ETS – coupled with the limited traditional EU budget lines such as the Connecting Europe Facility – will not only be necessary to support the realization of TEN-T but also to implement those national policies that promote climate-neutral and socially inclusive mobility for all.

Further than that, we underline how in the current situation the energy efficiency of public transport and railways makes our sector a key tool to save energy and increase EU energy resilience. Any pro-modal shift measure would not only contribute to the fight against global warming but also help EU energy independence.

The impact of the energy crisis and skyrocketing inflation are leading to serious consequences in our sector. Measures mustn’t further raise or add new costs for rail and public transport. The current financial climate could severely damage net-zero progressions and result in costs being passed on, which would be a major blow to living standards. We must avoid this at all costs and provide further support for vulnerable transport users, so a significant proportion of the Social Climate Fund should also be dedicated to support railways and public transport.

Hoping that the above suggestions will prove useful for the preparation of the upcoming trilogues, we remain as always at your disposal. 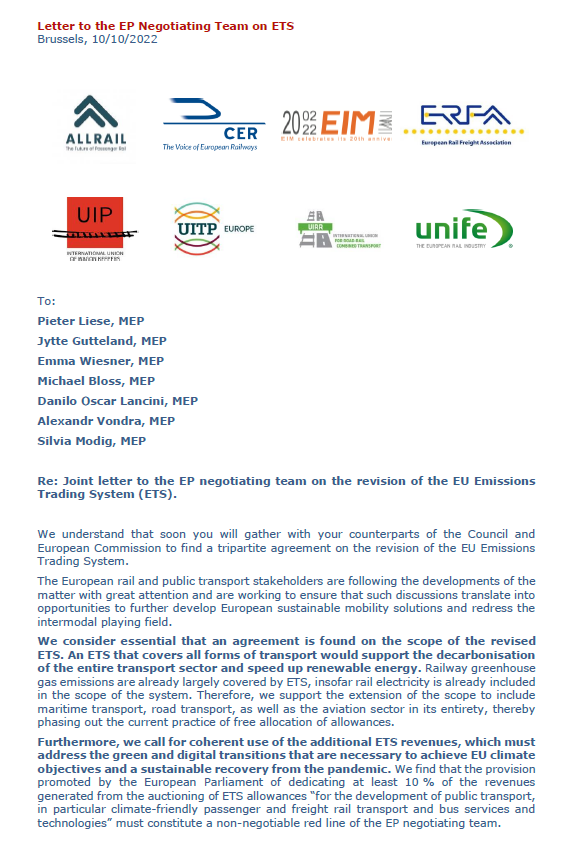