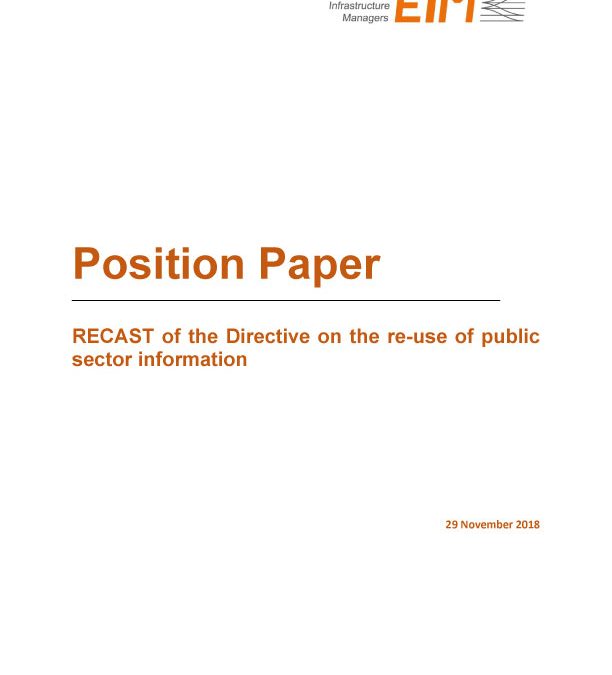 On the 25th of April 2018, the European Commission adopted a proposal for a revision of the so-called ‘Public-Service-Information Directive (PSI-Directive)’ on the re-use of public sector information. The European Rail Infrastructure Managers (‘EIM’) are aware of the important role of data in nowadays society and are also willing to contribute towards the goal of creating a ‘digital economy’. Many members of EIM already operate online ‘data-platforms’ which are mostly free of charge and easily accessible, offering a wealth of data and information to rail end users. However, EIM shares some concerns regarding the scope of the Directive and the lack of added value of the Directive (especially vis-à-vis the already existing Directive on Intelligent Transport Systems). EIM also argues that the notion of ‘public works’ should be omitted from the scope of the ‘high value data sets’ because the obligations are not sufficiently clearly defined.


Now that data has become more and more important in society, this topic has gained in importance. At the 2017 mid-term review of the European Commission’s (‘EC’) digital single market strategy, it was decided that the data economy should be identified as one of the top three priority areas for action.


Therefore, on the 25th of April 2018, the European Commission adopted a proposal for a revision on the PSI-Directive on the re-use of public sector information, the ‘recast-Directive’. The file was assigned to the Committee on Industry, Research and Energy (ITRE) within the European Parliament. This Committee published its report on 12 September 2018, following MEPs’ amendments. The Council of the European Union published its position on 25 October 2018. The ITRE-Committee vote is scheduled for the 3rd of December 2018.


The European Rail Infrastructure Managers (‘EIM’) are aware of the important role of data in nowadays society and are also willing to contribute towards the goal of creating a ‘digital economy’. Many members of EIM already operate online ‘data-platforms’ which are mostly free of charge and easily accessible, offering a wealth of data and information to rail end users.


However, EIM would like to make the following remarks concerning the proposed Directive:


Moreover, EIM does not see the added value of including the transport sector within the scope of the proposed Directive. The transport sector (including infrastructure managers, ‘IMs’) is already covered by the Intelligent Transport Systems Directive (‘ITS-Directive’) and its Delegated act EU 2017/1926. This act needs to be implemented into national law by 2019. Through this act, the transport sector has the obligation to make available travel-related data via so-called ‘national access points’.


By using two legislative instruments to regulate the same topic, the proposal risks creating a situation of legal uncertainty and incompatibility between the two Directives. Moreover, as mentioned before, many Rail Infrastructure Managers are already in the process of releasing data into open platforms.


Additional legislation is not necessary and does not contribute to the goal of creating less regulatory burden within the EU. Therefore, transport should be left out of the scope of the recast Directive because the ITS Directive already puts obligations on Infrastructure Managers in terms of public data dissemination. Priority should be given to sectoral legislation.


Article 13 sets out the obligation of the adoption of a list of so-called ‘high value data sets’. The data-sets that are qualified as such are subject to specific conditions: the re-use of high value datasets shall be free of charge and must be made available through the use of so-called API’s (‘application programming interface’).
What data should be exactly considered as a ‘high-value dataset’ is currently subject to debate. EIM would like to see, regarding the obligations for the transport sector, a delegated act that confers obligations on IMs that do not go beyond the obligations as currently imposed by the ITS-Directive.


Amendments 321 and 322 to the EP Draft Report propose for the inclusion of real-time information on public works on infrastructure.
As stated before, EIM strongly advocates transparency and open data in the area of Transport. Many EIM-members already publish information related to major rail infrastructure works including changes to planned rail passenger services as a result of public works.


However, EIM questions the socio-economic benefit of including datasets on public rail infrastructure works within the scope of High Value Datasets. The identification of any specific types of high value datasets and the provision of those datasets via APIs must be based on the assessment of their potential to generate important socio-economic benefits and consider within that assessment the cost and resource implications on public sector bodies.


Planning of rail infrastructure public works is complicated in nature and requires the input of multiple stakeholders including rail operators, local and national government. Without a clear assessment of the value-add of making rail public works information available via APIs, the provision would place an unreasonably high burden on infrastructure managers to collate, verify and make available such extensive datasets in a timely manner since public works are frequently subject to (last-minute) changes. Making available such precise and accurate data on public works could also lead to security concerns. 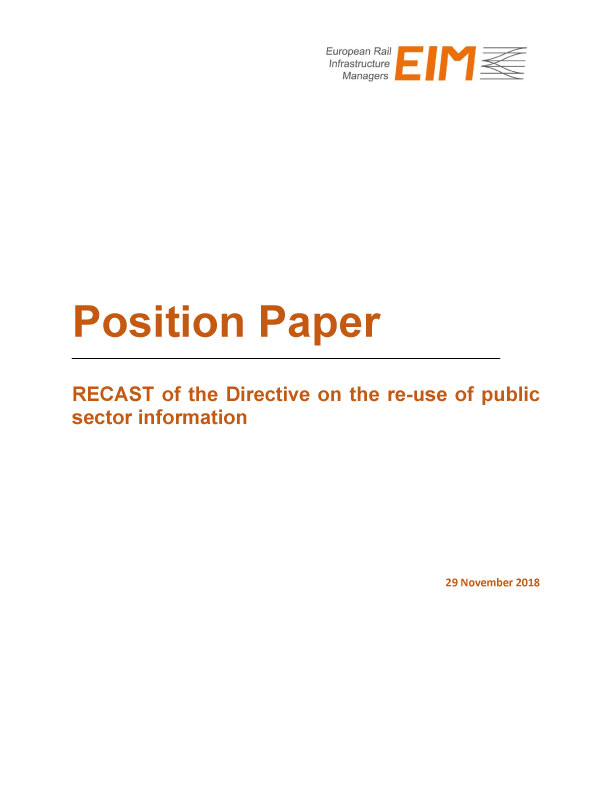