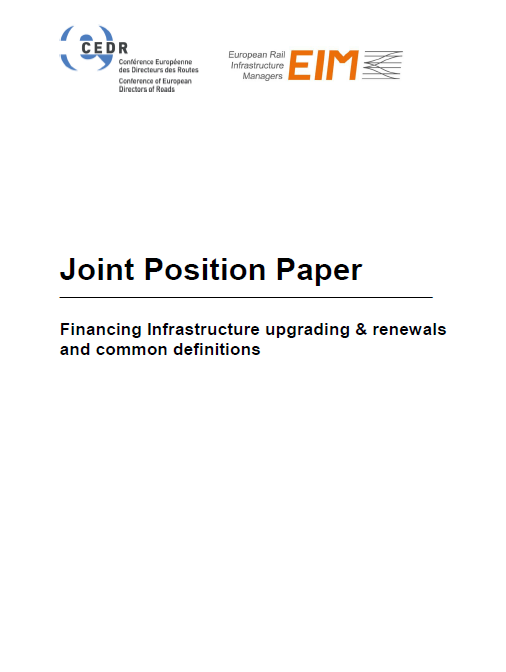 As the representative bodies for infrastructure managers and operators in the road and rail sectors, CEDR and EIM welcome the European Commission’s Proposal for a Connecting Europe Facility (CEF) published on the 6th June 2018. CEF plays a fundamental role in addressing effectively the current and future challenges for the transport sector, in particular for road and for rail. CEF is the financial lifeline of the Trans-European Network Programme, the infrastructure-based European policy directed towards the implementation and development of the European-wide network of all transport modes.


Transport is the backbone of the European economy and society and it has a significant impact on the growth, employment and social, cultural and economic development across Europe. The Single Market would not be completed without transport providing the mobility of the people, goods and businesses across the EU and wider continent. Transport also has a significant impact on jobs: completing the TEN-T Network will create 10 million extra jobs by 2050.  Mobility needs will become ever more demanding due to a  growing (and aging) European population and moving around Europe gets to be easier and faster.


Ageing infrastructure is a major challenge and concern in Europe. The European cities are some of the oldest on the planet- many roads and railway lines were designed and built in the 19th century, much of the upgrading of the network took place during the 1960s and 1970s and many of the critical sections are currently at the end of their life cycle with a number beyond their initial lifetime expectations. The Infrastructure Managers of CEDR and EIM are committed in renewing, upgrading and maintaining existing infrastructure in order to maintain high levels of safety and high-quality services and to have seamless connections with newly-built infrastructure. Renewing and upgrading the infrastructure will bring significant gains in terms of performance, safety, interoperability, capacity increase and positive effects to the environment.